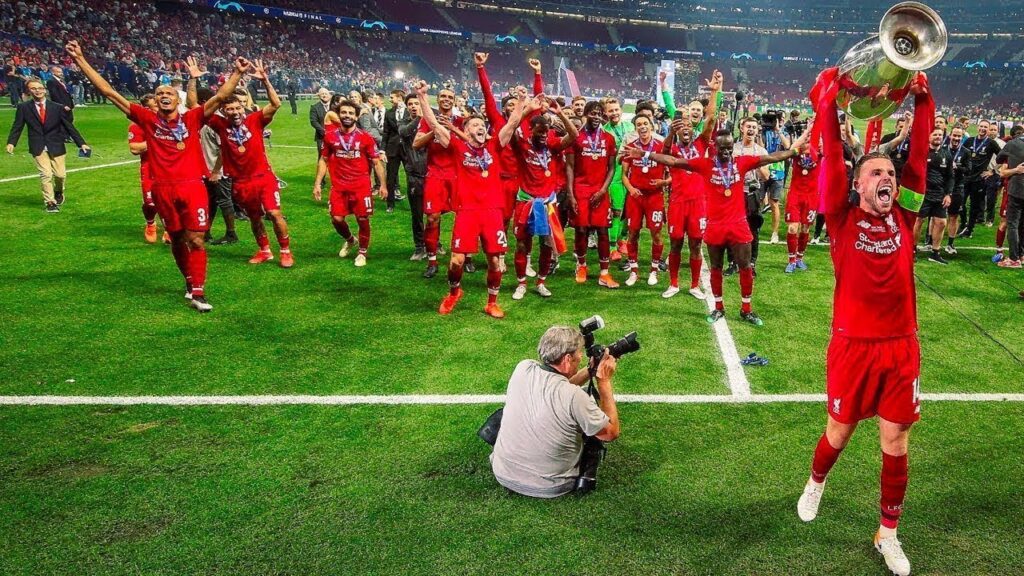 Everton FC was the first football team to play in Anfield stadium which is famous today as Liverpool FC’s historic home. A dispute between Everton and the site’s owner, John Houlding, resulted in Everton moving to Goodison Park and Houlding forming a new team that was eventually named Liverpool FC. The new club played its first game in 1892 and won its first league title in the 1900–01 season. In 1906 Anfield’s newly constructed terrace grandstand was christened Spion Kop for its resemblance to a hill where a famous South African War battle had been fought, which led to the well-known “Kopites” nickname for Liverpool’s fans.

Two managers, Bill Shankly (1959–74) and Bob Paisley (1974–83), were responsible for much of Liverpool’s success. Shankly took Liverpool from the English second division to win three English top-division league titles (1963–64, 1965–66, and 1972–73), as well as a Union of European Football Associations (UEFA) Cup victory in 1973. Paisley added a second UEFA Cup in 1976, six English league titles, and three European Cup wins (1977, 1978, and 1981). A fourth European Cup victory came in 1984, and Liverpool reached the final the following year against Juventus at the Heysel Stadium in Belgium. The match was marred by tragedy as 39 fans were killed, primarily by the collapse of a stadium wall that was caused by Liverpool fans charging Juventus supporters. Liverpool was banned from European competition for six years—and all English clubs were banned for five years—after the incident. Another tragedy struck the club in 1989 when, during a Football Association (FA) Cup semifinal match at the Hillsborough stadium in Sheffield, 96 Liverpool fans were crushed to death by overcrowding—England’s deadliest sporting disaster.

After that turbulent period, Liverpool won a third UEFA Cup competition (2001), took the 2005 and 2019 Champions League titles, and broke a 30-year streak without a domestic title by capturing the 2019–20 Premier League championship. The club also captured a total of seven FA Cup and seven League Cup victories. Successful Liverpool teams were renowned for a solid defense that set the table for exciting forwards such as Roger Hunt, Kevin Keegan, Ian Rush, Kenny Dalglish (who managed the club from 1985 to 1991), and Michael Owen, as well as attacking midfielder Steven Gerrard.

El Hadji Diouf, in full El Hadji Ousseynou Diouf, (born January 15, 1981, Dakar, Senegal), Senegalese football (soccer) player who was named African Football Confederation (Confédération Africaine de Football; CAF) Player of the Year for 2001 and 2002. He was a fiery, controversial figure off the field and established himself as either an out-and-out striker or a right-side midfielder whose strength, pace, and quick thinking often unsettled opposing defenders.

When Diouf was 17, he went to France to play First Division professional football with the Sochaux club. Soon after Sochaux was relegated to the Second Division, Diouf was picked up by Rennes for the 1999–2000 season, which enabled him to continue playing in the First Division. He acquired a criminal record after crashing a teammate’s car and injuring a female passenger while driving without a license, though the French courts sentenced him to community service rather than prison. Subsequently, Rennes transferred him to Lens in 2000, where he played for two seasons.

In addition to playing for French football clubs, Diouf also was also a member of Senegal’s national team. Diouf and the team made it to the finals of the African Cup of Nations in February 2002 but ultimately lost to Cameroon. Senegal also qualified for the 2002 World Cup and upset defending champion France in the first round. Although the team succumbed in overtime to Turkey in the quarterfinals, Diouf had been outstanding throughout the tournament and was named to the 2002 World Cup All-Star team.

Following the 2002 World Cup, Diouf joined England’s Liverpool FC. During a Union of European Football Associations (UEFA) Cup quarterfinal match against Celtic in Scotland on March 13, 2003, Diouf had the misfortune to overrun the perimeter of the pitch, and he fell into the crowd. He reacted by spitting at a Celtic fan, and Liverpool fined him heavily for his misconduct. He was charged with assault, pleaded guilty, and was fined £5,000.

During the 2004–05 season, Diouf was on loan from Liverpool and played for Bolton. His performance was strong on the field; he was popular with the fans; and he fits well with the Bolton team, which signed him at the beginning of the 2005–06 season. His pattern of volatile behavior continued to follow him, though: in late 2006 he was arrested after he allegedly assaulted his wife, but he was released without being charged.

Diouf was named captain of Senegal’s national team in the fall of 2006. While he was team captain, he announced his retirement from international football in the fall of 2007, which was largely viewed as a protest against organizational problems of the team’s management. His retirement was short-lived, however, and he returned to play with Senegal in the 2008 African Cup of Nations competition. Also in 2008, Diouf left Bolton and signed with Sunderland, but his performance there was lackluster. After less than a year with the team, he was transferred to Blackburn Rovers in January 2009. In July 2011 he received a five-year suspension from all football-related activities in Senegal after he claimed that the governing body of African football was corrupt. Three months later he signed with the second-division English club Doncaster Rovers. In 2012 he joined second-division Leeds United. Two years later he signed with the Malaysian squad Sabah FA, with whom he played one season before retiring from professional football.

The first final of the European Championship (then known as the European Nations’ Cup) took place in 1960 after two years of preliminary contests between 17 national football clubs. In 1960 the Euro final tournament consisted of four teams, but it expanded to eight teams in 1980 and 16 teams in 1996. Currently, qualification for a European Championship begins two years before the scheduled final when all members of UEFA begin playing among themselves to earn a berth in the 16-team tournament (the qualification process does not include the host country or countries, which automatically qualify for the final).

A decade and a half after the Beatles emerged from the Cavern, a new generation of Liverpudlian music arose from the subterranean shabbiness of Eric’s Club, run by Roger Eagle from 1976 until it closed in 1980. Less a distinctive sound than an attitude, the Liverpool beat of the late 1970s and ’80s first took shape on the local Zoo label, run by Bill Drummond. Both Echo and the Bunnymen and the Teardrop Explodes (whose respective leaders, Ian McCulloch and Julian Cope, had been members of the punk group the Crucial Three) had a languid style and a sense of self-adoration that looked back to punk and glam rock and forward to the New Romantic movement led by Duran Duran. Both groups moved on from Zoo to major labels.

Another Merseyside group, A Flock of Seagulls, had some international success in the early 1980s, but the biggest act to come out of Liverpool during this period was Frankie Goes to Hollywood (“Relax,” “Two Tribes”), whose front man Holly Johnson had worked with Drummond in the art-punk group Big in Japan. Scottish-born Drummond, who managed both the Bunnymen and the Teardrop Explodes, later cofounded KLF (Kopyright Liberation Front), the “group” whose experimental approach to music making resulted in several British number one hits constructed wholly by sampling—that is, by creating a pastiche of sounds from other recordings.

Steven Gerrard, (born May 30, 1980, in Whiston, England) was English professional football (soccer) player and manager who was considered one of the most complete footballers in the world in the early 2000s.

Gerrard was discovered by his local upper-division football club, Liverpool FC, at age nine. He played for Liverpool’s youth squad and signed a professional contract with them at age 17. His first-team debut came in 1998, and he became a regular contributor the following year. Gerrard had established himself as a star midfielder by the 2000–01 season when Liverpool won the League, Football Association (FA), and Union of European Football Associations (UEFA) cups and Gerrard earned England’s Young Player of the Year honors

Gerrard was named Liverpool’s captain in 2003, at just the age of 23. In the 2004–05 season, he led Liverpool to the club’s first Champions League title in 21 years, scoring a key goal in Liverpool’s dramatic three-goal comeback against AC Milan in the final. During the following off-season, he became embroiled in a high-profile contract dispute with Liverpool that nearly resulted in his transfer to Chelsea FC before he ultimately re-signed with his longtime club. Gerrard then helped Liverpool win both the 2005–06 FA Cup and UEFA Super Cup, and he was named the Professional Footballers’ Association Player of the Year at the season’s end. In 2007 Liverpool advanced to the Champions League final for the second time in three years but lost to AC Milan by a score of 2–1. Gerrard scored a career-high 24 goals in the 2008–09 Premier League season, which netted him the Football Writers’ Association Footballer of the Year award.

Phoodle – Wordle With a Twist