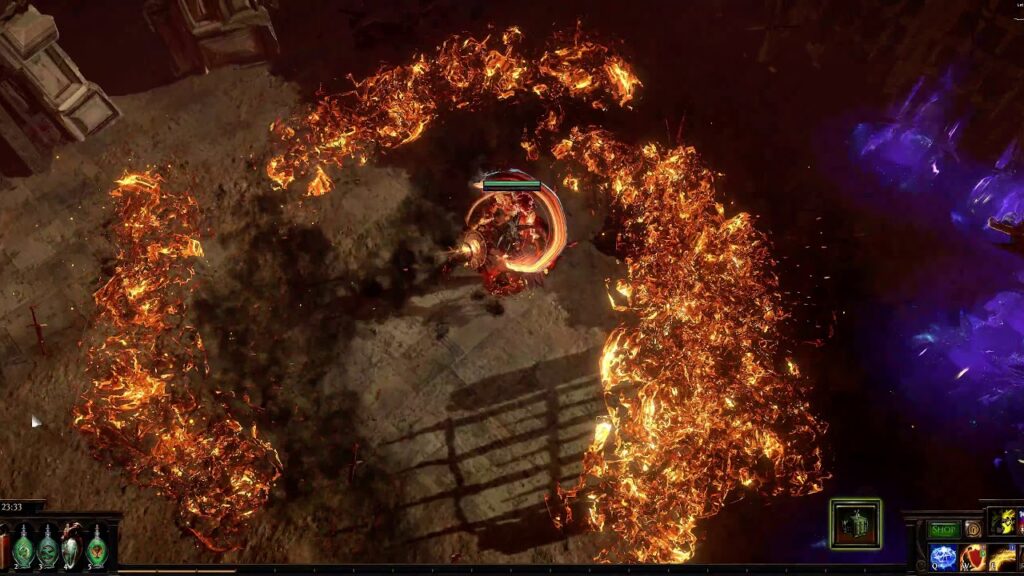 The Flame Wall Spellsplinger Elementalist is a Path of Exile build that is rather unique yet effective, and at the same time fun to play, making it a must-try for adventurous players.

When the word “wall” is mentioned, what comes to mind is a simple defensive structure. The keyword here is defensive because the Flame Wall Spellsplinger Elementalist build is anything but that. While its namesake skill wards off enemies, the build is all about wiping out maps with much ease. It’s very much worth the shot and the POE Currency you’ll have to spend for it.

Another important part of the build would be causing enemies to explode. For that, it’s vital to use Inpulsa’s Broken Heart, which causes shocked enemies to explode. The explosion deals 5% of the enemy’s total life, and said damage is dealt as lightning damage.

It’s a niche, non-meta build, but that doesn’t mean it’s a pushover. In fact, it can clear out enemies that the player hasn’t even seen yet. Plus, the damage over time will take care of enemies that manage to survive the explosion.

Another advantage it has would be the fact that it’s a league starter. This is because it doesn’t require any Unique item at the start of the league – that comes later. As for the necessary upgrades, you’ll be able to get them early in the league, so you can worry about POE trade later.

Last but definitely not least would be its versatility. Apart from core skill gems that are absolutely non-negotiable, there are many alternative skill gems and gear that you can use depending on your play style and needs.

Like what’s already been previously mentioned, Flame Wall will not be used defensively. Instead, we’ll be relying on both life and energy, especially the latter. For that, the Timeless Jewel of Doryani is going to be a huge help, as it grants an energy shield equivalent to 20% of our life. Lastly, the build has maxed cap, giving it another layer of defense.

But despite all those defensive measures, the Flame Wall Spellslinger is still a squishy build. And that’s okay because what matters is that you’ll be dealing much damage. Before your enemies can hit you, they’ll be dead.

Another problem the build has would be taking on bosses. It’s mostly geared towards clearing waves upon waves of enemies, not fighting an enemy with much life and deals much damage. While its damage over time will definitely help, it’s still not going to deal immense damage on bosses. When bossing, this build will have to do a lot of dodging in order to survive.

Last but definitely not the least would be the need to stutter-step. You’ll also need to shoot around corners. Like what’s been said, this build ironically doesn’t have many defensive measures, so you’ll need to be careful.

Overall, however, the pros outweigh the cons, making this build worth picking up if you’re into its unique play style.

Beyond Bread and Butter

Other than its core skill gems, you’ll also be needing the following support gems. For the Flame Wall and Spellslinger, have it with Elemental Focus, Efficacy, Burning Damage, and Swift Action support gems. This is to further bolster fire damage, as well as damage over time.

As for Kinetic Blast, give it Faster Attacks or Chain (this will depend purely on your preferences), Greater Multiple Projectiles, and Combustion support gems. To further increase your damage for both skills, have these three auras: Herald of Ash, Precision, and Enduring Cry.

For utility, you’ll need golems. Obviously, they won’t be your main source of damage, but they make good damage sponges. They’re not as smart as those from golem builds, especially when it comes to protecting you, but they’ll do. Better a few dumb golems than nothing, after all.

For mobility, have Flame Dash with Arcane Surge. Portal also helps, unless you want an extra skill for combat and just want to rely on consumable portals instead. Steel skin, meanwhile, adds to your defense.

Lastly, if you have a trigger wand, use Wave of Conviction, Tempest Shield, and Purifying Flame.

For those that want to stick to the metagame, The Flame Wall Spellsplinger Elementalist build isn’t exactly hot. But it definitely is for those that want a breath of fresh air. If you are the latter, then we strongly suggest that you try this out.