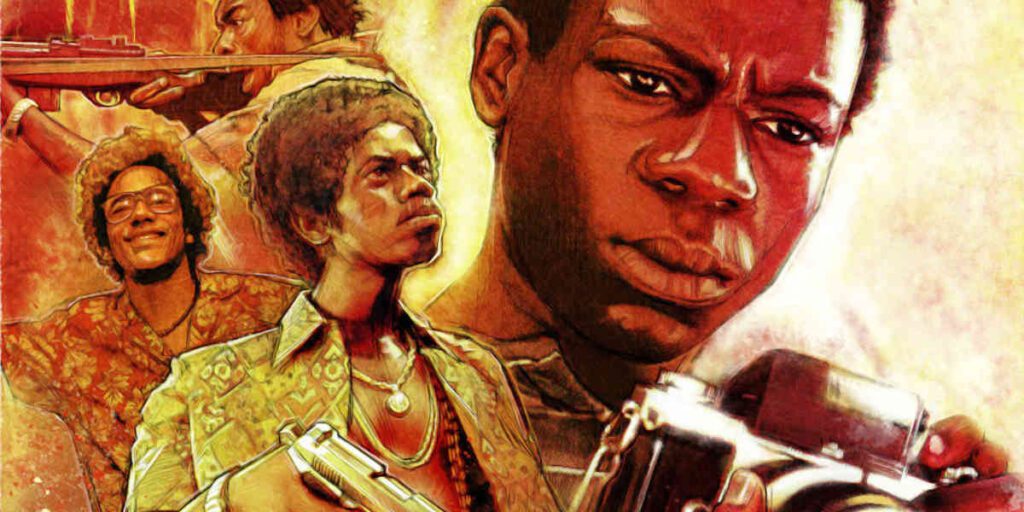 Once in a while, a film comes along that shakes you to your core. It pulls you into the center of it, and surrounds you with bigger-than-life characters, raw images, and scenery that implores you to lose yourself for the time you spend watching it. This is such a film.

The city of God follows two young men, Li’l Dice and Rocket, as they grow up in the slums of Rio de Janeiro, Brazil. It is the way of the slums for the young men to be hoodlums, and most of them take this route. There is, however always an exception…Rocket has aspirations. He is the good one and is driven by his fear of being shot and/or winding up a poor fisherman like his dad. One day he is handed a camera and discovers his passion. Li’l Dice, on the other hand, seems to have an innately born thug mentality that he cannot ignore…nor does he choose to. He runs with the slum gangsters and quickly adapts to being a criminal. His fate is sealed after riding along on an eventful night with the Tender Trio, the most notorious gang in the slums. The devil within him is released afterward and there is no turning back. I watched this movie online on Soap2Day.

The film follows these two young men and their cohorts through two decades as they grow up on the mean and gritty streets of Brazil. This is not the beautiful and lush Brazil that you would recognize from pictures. No, this is the backside, the hidden side…where the drugs and gangs live. The streets are mean, and raw, and gritty…and one must fight for their life daily.

While watching the City of God, there are many moments that are cringe-worthy; whether it be Li’l Dice’s (eventually known as Li’l Ze after an ostentatious naming ceremony performed midway through the movie) maniacal and totally deviant laughter ringing out at any inopportune moment, or at the realism of the poverty and despair of this environment, or maybe it will be simply the contrast between what was thought of about Brazil…and what is really the truth. Regardless, the film will keep you riveted because of a story that throws problem after problem at you, but never offers any solutions.

There is a hardness to this film that is rough and bitter to swallow. It is, however, so impressive in its openness and telling of this true story. Watching the children so young, running through the streets yielding guns and partaking in crime…you can’t help but feel a twinge of pity for them. This is their life, and the cycle continues, day in and day out. They know nothing else.

This is one of the best documentary-style feature films you will ever sit down to watch. It is available for purchase through Amazon.com, Barnes  amp; Noble, and Borders.