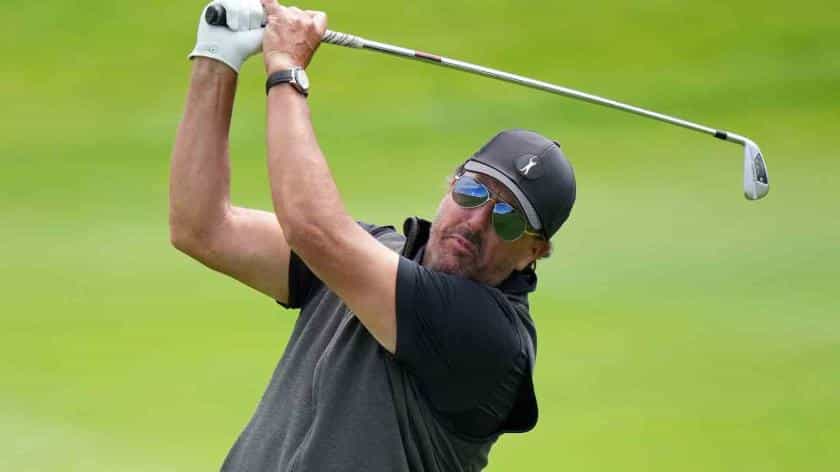 Backed by the Saudi Arabia Public Investment Fund, the LIV Invitational Golf Series is a new professional golf tour beginning play in 2022. Led by Greg Norman, LIV, previously known as the Premier Golf League, was created to rival the PGA Tour and give more earning power to players.

The tour was met with skepticism for much of its infancy and didn’t seem as if it would be a threat to the PGA Tour or even the best online casino. Yet, LIV and its owners have deep pockets and are clearly committed to showcasing the top golf talent in the world.

Phil Mickelson first made waves earlier this year when his comments about LIV (and its funders) from his upcoming biography were released by the book’s author. Ignoring the controversy surrounding what he actually said, he did express a desire to play in the new golf league.

Months later, Mickelson is one of many surprise stars to skip a PGA Tour event to play in LIV’s inaugural event at the Centurion Club in London, United Kingdom.

Mickelson has been on the PGA Tour for more than 20 years, during which time he has won 45 tournaments. He’s a 6-time major championship winner and authored one of the best stories in sports in 2021 when he won the PGA Championship and became the oldest golfer to win the major.

Yet, Mickelson has always been willing to take risks, and it should be no real surprise that, past his prime and nearing the end of his career, he would be looking for a big payday.

While Mickelson’s inclusion wasn’t all that surprising, Dustin Johnson announcing his resignation from the PGA Tour to join LIV was a bombshell. Johnson made the announcement just days in advance of the tour’s inaugural event.

The decision was even more surprising considering Johnson was due to play at the RBC Canadian Open the weekend of LIV’s inaugural event. RBC was a sponsor of Johnson for quite some time, and the former Masters’ winner was supposed to headline the event.

While unfounded, some rumors suggest Johnson was paid $150 million to participate in LIV. Surely he’s being paid a lot more than he would have earned on the PGA Tour since he noted he made the decision based on “what’s best for my family and me.”

Johnson, one of five former world No. 1 ranked players to join LIV, held the top ranking for 64 consecutive weeks. He has 24 wins on the PGA Tour and is one of only three players to win a title in each of their first 13 seasons.

Johnson wasn’t the only golfer to resign from the PGA Tour. Others include Sergio Garcia, Kevin Na, and Charles Schwartzel.

Known for his booming drives and bulked-up transformation over the past few years, Bryson DeChambeau is one of the most recent golfers to join LIV. Sources confirmed the 2020 US Open winner was planning to participate in LIV’s first event in the US at Pumpkin Ridge in Portland, Oregon, at the end of June.

DeChambeau had said a week prior that he intended to keep playing on the PGA Tour, although he was one of LIV’s first targets. While he has struggled in 2022 and been injured, DeChambeau is an accomplished golfer with eight victories on the PGA Tour.

A nine-time winner on the PGA Tour with more than $35 million in career earnings, Reed also plans to participate at Pumpkin Ridge in late June. The 2018 Masters Champion, like DeChambeau, has struggled during the last year or so but gives an instant boost in credibility to LIV Golf.

DeChambeau and Reed are particularly polarizing players, both among fans and other golfers. The PGA Tour is probably banking on these two being the last of the top-ranked golfers to commit to LIV, and it has threatened fines or suspensions for others who do.