Hybrid Mobile App Frameworks You Can Opt for in 2022 & Beyond 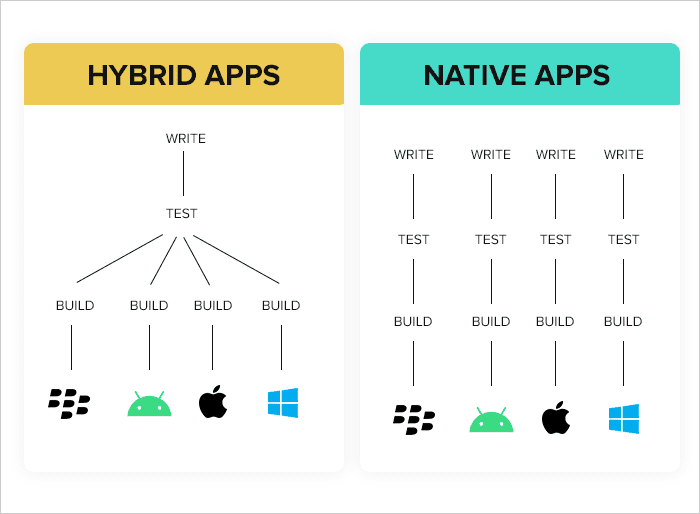 According to a recent report, 74% percent of the top 50 retail apps on the American app store are hybrid apps.

And with hybrid apps becoming the preferred choice for most companies, the popularity of frameworks is following suit.

In fact, hybrid mobile app frameworks are all the rage these days, and understandably so.

Not only do these cross-platform frameworks save you time in the development stage by allowing you the reuse the code, but they also reduce your development costs by a large margin.

But now the big question arises, which framework do you use for your hybrid mobile app development?

We turned to Statista to help us find the most popular cross-platform app frameworks that are preferred by developers worldwide.

Having said this, not every framework is for everyone. So let’s take a deeper look at the pros and cons of the top cross-platform app frameworks.

Top 5 hybrid mobile app frameworks for 2022 and beyond.

Backed by Google, Flutter’s popularity has skyrocketed in the past few years.

And as of December 2021, there were more than 90,000 apps built with Flutter on the Google Play Store.

Flutter is essentially an open-source software development kit that uses the all-powerful Dart language and the C++ rendering engine. It has a single codebase for both Android and iOS, making it extremely easy for developers to build apps for all platforms.

Despite being #2 in terms of usage, React Native is one of the most famous cross-platform mobile app frameworks.

Launched by Facebook in March 2015, it is another open-source hybrid mobile app framework that is used by 38% of developers worldwide.

It is a JavaScript-based framework that allows you to build natively rendered cross-platform mobile apps that can be deployed to iOS, Android, and other platforms too.

Super easy to find developer talent, as React Native is based on React and JavaScript.

Saves coding time and costs since a large part of the code can be reused.

Allows developers to customize the app for different platforms. So apps will not only look native but will also perform like native apps.

Makes it easy for developers to test new features and fox bugs with Fast Reload.

Has tons of available plugins for easy compatibility with hardware components of a device.

Comes with a large developer community for support and improvements.

Has compatibility issues and debugging limitations, as it is still in the beta stage.

Lack of custom modules and some components.

Might need to hire a few native developers to help implement advanced features.

Not the best choice for apps that have multiple screens, special effects, and transitions.

It’s highly useful in developing feature-rich apps, because of the many 3rd party plug-ins that are available for Cordova.

Some apps that have been built using Cordova are Pacifica, Spark Chess, Fan React and Sworkit.

It is incredibly easy to learn and has a very simple coding structure.

It needs a very simple setup for creating a project, adding platforms, building the app, etc.

Let’s developers implement a broad range of functionalities into the app with its plugin architecture support. It also comes with great community support.

Its cross-compilation capability sometimes slows down the functioning of hybrid apps.

It sometimes has compatibility issues with plug-ins from different platforms.

Time wasted in modifying plug-ins to make them compatible.

Despite the growing popularity of frameworks like Flutter and React Native, Ionic is still a classic hybrid mobile app framework.

In fact, around 10% of App Store apps, and 12% of Play Store apps have been built using Ionic. Its front-end HTML is built on top of AngularJS and Cordova. And it’s multiple layers of technology help in building feature-rich applications with impressive UI.

Ionic is the secret behind many apps of businesses like Target, General Electric, Market Watch, The Home Depot, Amtrak, and NBC.

It makes it easy to build simple apps, and even easier to update it.

Framework building is fast as it uses Angular concepts to speed up the process.

It has a short learning curve, and one can simply hire AngularJS developers to get started.

Has a stable API with Shadow DOM and Custom Elements.

Ionic gets access to all of the Angular core libraries and integrates with the established Angular ecosystem.

It has solid integration capabilities, ready-to-use UI components, and plug-ins.

It can be overly dependent on plug-ins.

Does not offer Hot Reloading feature for easy experimentation and debugging.

It can make apps very heavy, depending on the level of complexity.

It also has the occasional native app performance issues.

Built by the developers behind Mono, Xamarin was acquired by Microsoft in 2016. Since then, it has become a popular cross-platform product for developing mobile apps within the Microsoft ecosystem.

It is a streamlined, independent, open-source hybrid mobile app framework that can be used to build apps for Android, iOS, Windows, etc.

The cross-platform framework of Xamarin has been used to build apps for StoryO, the World Bank, Alaska Airlines, FreshDirect, Insightly, JustGiving, etc.

This framework is easy to learn and use. Any developer with knowledge of .net and C# can code using Xamarin.

Saves maximum time, as up to 95% of the code is reusable for various platforms.

Unlike other hybrid frameworks, apps that have been built with Xamarin perform close to native apps.

It comes with strong corporate support.

It offers simplified maintenance and makes it easy to deploy updates to both iOS and Android.

Although it is free for individual developers, it is a very expensive option for business and professional use.

Xamarin comes with a very small talent pool of developers who are conversant with it. So finding a developer for your project could be a challenge.

It comes with its own platform-specific limitations when it comes to iOS and Android.

There is a lag in API support for the latest platform updates.

It is not the best choice for the development of gaming apps.