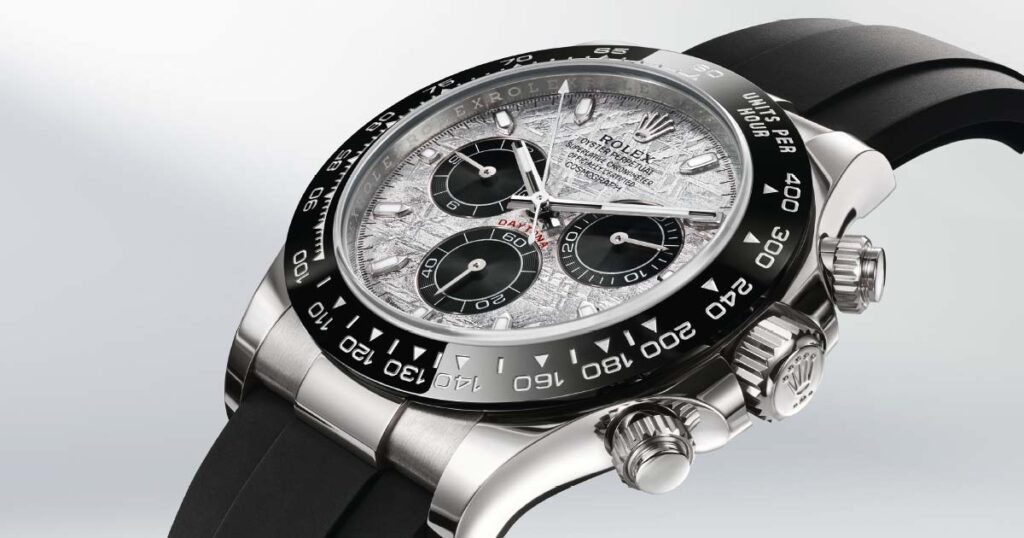 There are many different versions of the Rolex Cosmograph Daytona Watch. The first version was introduced in 1963, with a yellow gold case and bezel. Later, steel and gold versions were introduced. Today, the Rolex Cosmograph is still one of the most popular and well-known watches in the world. Let’s take a look at the Rolex Daytona nearly 60-year history.

We’ll go back in time to see how the Rolex Daytona model came to be. Rolex’s inventor, Hans Wilsdorf, had no idea that the brand would ever be associated with motor racing. Sir Malcolm Campbell was one of the most well-known auto racers in the world, and he drew Wilsdorf’s notice after achieving multiple achievements in the auto-racing sector on Florida’s Daytona Beach. Because of the parallels Wilsdorf found between Sir Campbell’s and Rolex’s personalities, the latter wanted Sir Campbell to be Rolex’s ambassador. But the mystique of Daytona isn’t only related to one individual; it’s also linked to a slew of other car racers who grew up in the city or relocated there.

Even after being so strongly associated with the Daytona, Rolex released the Chronograph reference 6234 watch in 1955, which is said to be the forerunner of our current Rolex Cosmograph Daytona. The assertion is backed up by the watch’s ability to create a variety of appearances. Despite its lack of popularity, the Chronograph has aged nicely and is now known as the Cosmograph Daytona.

The Rolex Cosmograph Daytona’s first two series were not Oyster-cased. The dials of these watches were simple black, and they were not commercially successful. Joanne Woodward gave Paul Newman an Exotic Dial Cosmograph Daytona in 1962. Since then, the model has been dubbed the Paul Newman watch. Rolex became Daytona’s official timekeeper in 1962, a year before the Cosmograph Reference 6239 debuted. In the same year, Rolex gave this model the moniker “Daytona” to underline the watch’s connection to the famed motor race. The tachymeter scale on the bezel of this watch was designed specifically for racing drivers, which explains why it is much larger than the tachymeter scale on most other timepieces.

The year 1988 was a watershed moment for Rolex, when the reference 16500 series of Oyster Perpetual Cosmograph Daytonas was introduced. The new chronograph came in three different versions: steel (ref. 16520), steel and gold (ref. 16523), and gold (ref. 16524). (ref. 16528). When compared to prior models, there were a few differences. The case diameter was expanded from 37 to 40 mm, and the Plexiglas was replaced with a sapphire crystal. The dial was lacquered with metal hour indexes inlaid with illuminating material and sub-dials with scales in contrasting colors and was available in white or black (silver for the black dial and black for the white one). Only screw-down push-pieces were offered on the Daytona currently.