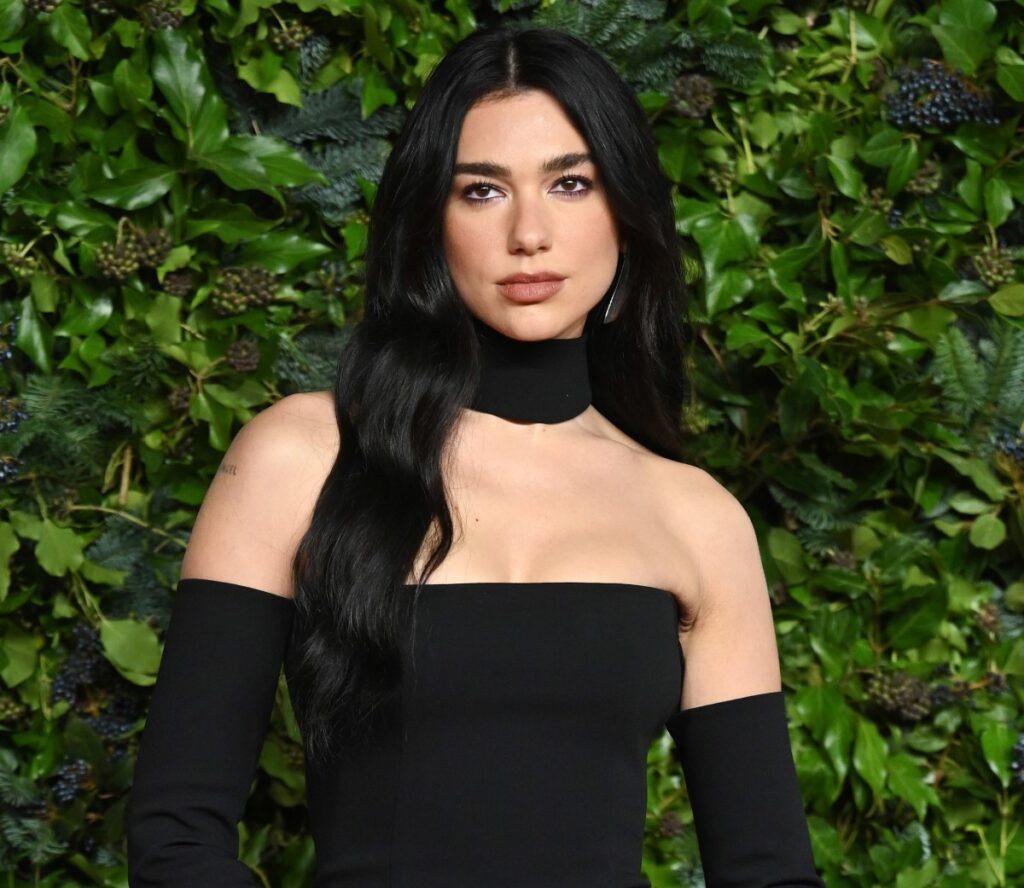 Dua speaks English with a British accent but her native language is Albanian. Dua Lipa net is about $25 Million.

Dua Lipa was born in London, England on August 22, 1995. Her father name is Dukagjin Lipa and he is a marketing manager and also lead vocalist for the Kosovan rock band Oda. Her mother name is Anesa Lipa, she works in tourism. Dua attended the Sylvia Young Theater School part-time. Dua Lipa attended the Third Millennium School in Pristina and there she became a fan of hip hop artists which had a huge impact on her musical influence.

In 2013, Lipa had a relationship with English chef Isaac Carew who was not consistent, and she split in February 2017. She then dated Paul Klein who was the lead singer of the American band LANY, from August 2017 to January 2018. Dua Lipa began a relationship with Anwar Hadid on 14 June 2019, they separated in December 2021.

Dua Lipa started her career doing cover songs of her favourite artists such as Pink and Nelly Furtado, which she did at the age of 14. She started on Youtube because she was inspired by the fame of Justin Bieber who also got it from youtube. Dua Lipa moved back to London to become a singer where she lived with a friend and attended parliament Hill School and on the weekends she attended Sylvia Young Theater school.

Dua worked at restaurants and nightclubs as a hostess and she did music lessons with the money she earned there. In 2013, she made her screen debut in the commercial for “The X Factor”. In the same year, she got a contract at TAP management where she got a monthly salary to focus on recording music.

Dua Lipa co-wrote the song Hotter than Hell which got her a deal with Warner Music Group in 2015. Dua first single “New Love” was released in August 2015 and her second single “Be the One” got some great numbers, it was #1 in Belgium, #6 in Australia and #9 in the UK. Dua Lipa’s first tour was in the UK and Europe in January 2016 and it finished in November of the same year.

Dua LIpa’s third single ”Last Dance” was released in February 2016. and the “Hotter than Hell” on May 6, it was #15 in the UK. Dua Lipa’s fifth single was released in August and was titled “Blow your Mind (Mwah)” and was #30 in the UK, this was her first entry in the US bIllboard 100. Dua Lipa won the Ebba Public Choice Awards.

Dua Lipa’s Selt-titled album was released in 2017 and the album was #5 in the UK. Dua Lipa’s new single  “New Rules” reached #1 in the UK and it still is her best selling. In the summer of 2017, Lipa performed at Glastonbury, We the Fest, and on BBC’s “Later…with Jools Holland.” She had four singles reach the UK top 10 in 2017: The aforementioned “Bridge over Troubled Water,” “Be the One,” “New Rules,” and “No Lie.

In 2017, Dua Lipa was nominated for the Teen Choice Awards for Breakthrough Artist. In February 2018, Lipa collaborated with American DJ Whethan on the song “High” for the “Fifty Shades Freed” soundtrack.

Dua released the single “Swan Song” for the soundtrack to “Alita: Battle Angel.” in January 2019,  then released the lead single “Don’t Start Now” from her second album “Future Nostalgia”. Her next single leading up to the release of the album was “Physical,” released in January 2020. On March 27, 2020, Lipa released her second album “Future Nostalgia”. Kipa released a remix of “Levitating”, which featured Madonna and Missy Elliot on August 13, 2020.