A Short History of Goalkeeper Gloves 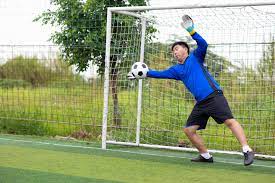 Goalkeeper gloves weren’t always considered essential pieces of kit. As recently as the 1970s, some goalies only wore gloves during bad weather, while others didn’t wear them at all. Nowadays, all goalkeepers wear gloves as they offer more protection and a better grip.

Let’s take a look at the unusual and surprisingly short history of goalkeeper gloves.

The first known patent for goalkeeper gloves was granted in 1885 to a British football manufacturer named William Sykes. The first pair of gloves featured a combination of leather and a layer of rubber for protection. We can now say William Sykes was a forward thinker. Although he patented them, the gloves weren’t actually used until the mid-20th century.

As you may know, football originated in England in 1863, when the Football Association was established. The association adopted the “Laws of the Game,” or LOTG, which governed the game. However, there was no mention anywhere of goalkeeper gloves.

The First Goalkeeper That Wore Gloves

The first known goalkeeper to wear gloves was Argentina’s Amadeo Carrizo. He played for River Plate from 1945 to 1968 and retired from football in 1970.

In addition to being the first known player to wear gloves, he was also the first to leave the penalty area. Although this is common in modern football, Carrizo created history at the time. He regularly left the 18-yard box to pass the ball to another player or to clear it. Additionally, he was the first to use kicking as a way of starting a counterattack.

Amadeo Carrizo was a pioneer who brought many innovations to the art of goalkeeping.

The use of goalkeeper gloves spiked during the 1960s and 1970s. But still, many goalkeepers only wore them when it was wet to get a better grip of the ball. At the time, there were no manufacturers that specialized in goalkeeper gloves, so even the best goalies often wore gardening gloves.

Gordon Banks, widely considered England’s finest goalkeeper, started wearing gloves during the 1970 Mexico World Cup, but only as an experiment.

During the 1970s, the goalie gloves market flourished. Demand increased as gloves became more popular, and the manufacturers recognized it. Brands such as Reusch, Stanno, Sondico, and Uhlsport were among the first to create specialized goalkeeper gloves. Both professional and amateur goalkeepers wanted to purchase gloves now.

These gloves were basic compared to today’s models, but they offered better protection and grip, laying the foundation for contemporary models.

Shortly after the manufacturers started making specialized goalkeeper gloves, they became an essential part of football equipment. More and more brands developed their signature gloves and experimented with different materials and shapes.

With advances in technology, the options are almost limitless. They still serve the same fundamental purpose: providing a good grip and protecting against injuries. But you can now find plenty of glove accessories: glues, bags, towels, you name it. The manufacturers have thought about everything and want your gloves to last for as long as possible.

You can choose gloves based on the brand, color, price, etc. Most importantly, you need to consider the cut. The way materials are stitched together affects your comfort and grip. Although the choice is entirely up to you, you’ll find some cuts work better for your hand shape.

Goalie glove manufacturers are constantly working on something new and trying to create unique cuts. Regardless, there are still four basic types:

Choosing a pair of goalkeeper gloves mainly depends on whether you like a tight or loose fit and if you want gussets or not.

The wide range of options often makes the selection harder. But you should never settle for gloves you’re not 100% sure about.

Goalkeeper Gloves Are a Necessity

Although 50 years ago almost nobody wore goalkeeper gloves, they have now become a fundamental piece of equipment. You’ll find numerous stores that sell all kinds of gloves and accessories. To find the right fit, shop at goalkeeping accessories online store with a wide range of options from renowned brands.